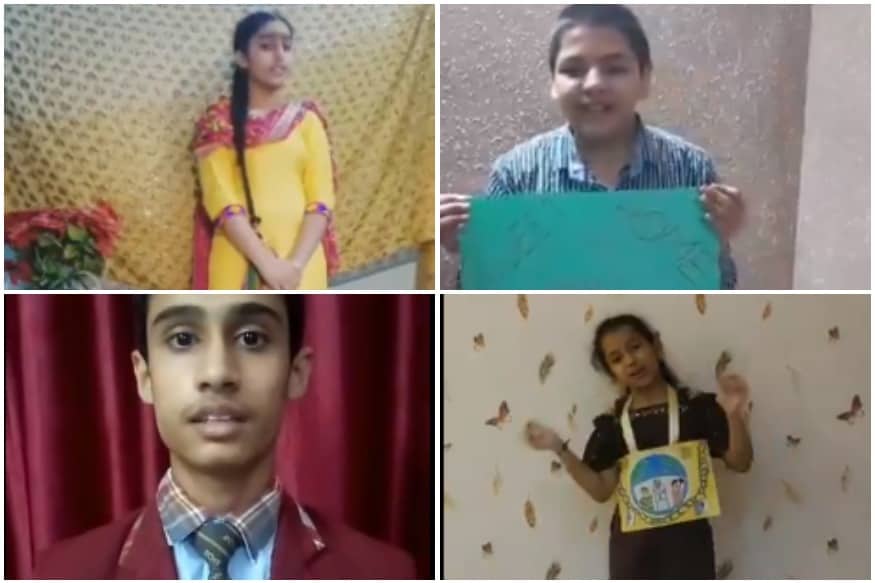 The ‘Ambassadors of Hope’ campaign was launched to engage children in coronavirus awareness amid lockdown | Image credit: Twitter

The maximum number of entries came from Ludhiana district with 16,084 students sending in their videos, followed by Amritsar, Sangrur and Patiala districts.
News18.com
Last Updated: May 6, 2020, 9:19 PM IST

Punjab government`s online video competition campaign ‘Ambassadors of Hope’ has broken the world record for most entries received as 1,05,898 students sent in their entries within the first week of launch.

The campaign was launched by the state’s Education Minister Vijay Inder Singla on April 29 in a bid to encourage students to come up with positive ideas to overcome the negativity of lockdown. As per a tweet by Singla on Wednesday, the competition had received nearly1.5 lakh entries so far, breaking the record previously set by the Philippines which had received over 43,000 entries during a similar 8-day long competition.

“The campaign created a world record as never in the past so many students participated in an online video competition concluded in eight days. Currently, Cebu City Commission, a government body of the Philippines, holds the record of the highest participation as they had got 43,157 participants in eight day-long online competition,” Singla said.

“The primary objective of engaging the students in constructive activity in the atmosphere of abject negativity has been achieved,” ANI quotes Singla as saying in an official statement. “It is heartening to see the response we have got from the children.

In an interview with IANS, Singla had previously said that the idea behind the competition was to engage children either via radio or television so that no child is left behind.

The maximum number of entries came from Ludhiana district with 16,084 students sending in their videos while Amritsar, Sangrur and Patiala districts followed suit with 13,862, 10,741, and 10,614 entries respectively. As per the report in ANI, the social media campaign also managed to engage about 2.5 crore people across platforms in just eight days.

“For me, every child is a winner as they have kept the Punjabi Virsa alive. Most of the entries are deeply-rooted in Punjabi ethos and culture. I am grateful to all the students, who shared innovative ideas through videos on just one call,” Singla said in the statement.

He also added that he and his team will personally go through each of the 1.5 lakh video entries to choose the winner.

Speaking about the Ambassadors of Hope competition, Singla had earlier said, “Its an online competition for the children of Punjab. As students are sitting at home and feeling negativity due to staying inside home I launched this programme where the children need to upload a video which could be of minimum one minute on any social media.” He said the children need to tag their videos with the hashtag #AmmbassdorsofHope so that it is viewed by the government and everybody in Punjab.

The competition was open to all students of Punjab, whether from government or private school can participate in the competition and there is no registration fee required.

Many children sent their videos to the government with creative messages to spread awareness about coronavirus. Some sang songs, some recited poems, some played out skits. Many of these videos can be found under the #AmbassadorsOfHope hashtag on Twitter.

Previously, the minister had announced that Punjab government had preponed the summer vacations in the state to save the academic loss to students due to the nationwide lockdown amid the novel coronavirus (Covid-19) pandemic.

In Punjab, which had for the first time introduced board examinations in classes five and eight, all classes have been suspended due to the lockdown.

However, Singla maintained that the state was making serious efforts to ensure students’ education did not get hampered due toCOVID-19. “Our state government was the first state to decide on promoting children from their classes,” he said.

There are 19,000 government schools in the state. As per the minister, 5,550 schools had been converted to “smart schools” with all facilities for online education even before the lockdown was announced.

He said the rest of the school will also be converted into smart schools after lockdown ends.

How dangerous is the second wave of CORONA mutant variety

While some travel nurses receive lucrative paychecks to work with COVID-19 patients, those in other departments are out of work as contracts for cancelled